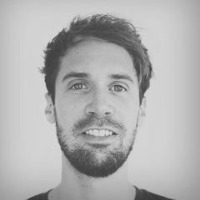 Justin Kleiner is a musician and visual artist, based in Santa Barbara, California. His artwork has been described by Cool Hunting as “a combination of contemporary graphics and traditional archetypes”, while Gotta Dance Dirty calls his music “ethereal, haunting, electronica.” Having explored both mediums since childhood, he’s been involved in a variety of projects, from composing music for the award-winning film Way of the Ocean, to creating artwork for the Shepard Fairey-curated exhibit, Manifest Hope. After collaborating with his brother Matt as a music & art duo known as The Protist, he is currently focusing on solo work.

Would You Like Art With That – Carmichael Gallery, Los Angeles, CA (2007)